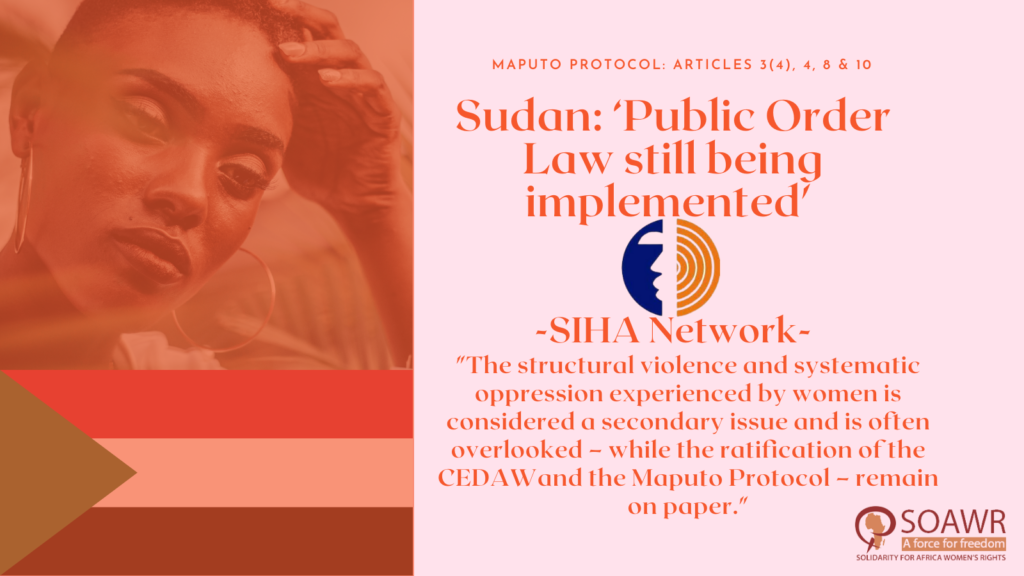 On August 15th 2021, Sudanese artist, Fatim Ibrahim Hassan (also known as ‘Marwa Al-Dowaliya’) was physically assaulted and sexually harassed, according to her alleged statement to SIHA on August 19/2021, by 13 policemen from “Sharg Al Nile Police station” of the “community Security division”, which has been known since the Al-Bashir regime as the Sudan Public Order law divison. Marwa was assaulted alongside another 8 women and 21 men.

This situation happened during a police raid on a wedding ceremony in Khartoum North – Sharg Al Nile area. Marwa allegedly indicated that she and the other women were physically beaten by the police, sexually harassed and that their dresses were lifted up while they were forced at gunpoint to lay down on the floor. According to Marwa, the police terrorized the guests by firing gunshots into the air. Marwa and the 29 other women and men were subjected to a summary trial under the Sudanese Criminal Act, articles 69, 77, 99 and 103 for disturbance of public peace, public nuisance, obstructing a public servant from performing their duties, and posing a threat to a public servant. All the 30 arrested citizens were asked to pay a fine of 30.000 SDG (68 USD). A video surfaced on social media on the 16th of August clearly showing one of the 13 police officers implicated in this assault.

Crimes of sexual and gender-based violence against women by Sudanese security – military and law enforcement continue to be the norm in the public and private spheres across the country. Sudan continues to adopt and apply a legal framework that enables violence against women and girls and offers unlimited impunity towards perpetrators of crimes against women while lacking mechanisms of accountability. Thus this enables the recurrence of these crimes leaving women and girls with no access to justice or legal remedies.

The structural violence and systematic oppression experienced by women is considered a secondary issue and is often overlooked. While the ratification of the Convention on the Elimination of all Forms of Discrimination against Women (CEDAW), and the Protocol to the African Charter on Human and Peoples’ Rights on the Rights of Women in Africa (Maputo Protocol) – remain on paper. Moreover and often in official discourse, the Sudan Transitional Government has indicated their lack of political will to address violence against women and girls beyond tokenism.

SIHA emphasises that until the Transitional Government shows commitment to repealing oppressive and discriminatory laws, and avail the necessary instruments and resources to end sexual and gender-based violence crimes in Sudan, women, girls will still be exposed to such human rights violations perpetrated by state representatives.

SIHA strongly condemns the silence of the Sudanese Transitional Government, Ministry of Justice, the Ministry of Interior, and the Office of the General Prosecutor of Sudan on the violence perpetrated against women in Sudan, specifically this outrageous attack.

SIHA reiterates its demands that the Transitional Government must: